What is Laser Cleaning?

Laser cleaning was invented in the seventies. Back then, it was a great idea on paper because the laser sources were still young and very expensive. Therefore, the concept didn’t get any further than the laboratory of a few big universities. In the last few years, important innovations have been made in laser technology. The price of laser sources were getting lower, got more powerful and the control over the laser pulses improved. This is what opened the door to commercially viable applications.

We all know a laser beam as a thin red light coming out of a laser pointer. However, laser beams can also be in different colors or even in a light frequency that isn’t visible anymore for the human eye. This kind of “invisible” laser is what is used for laser cleaning.

The power of the laser beam lies a lot higher with laser cleaning: powers of 1000W and more are used. This may seem like it’s not that much but this power is concentrated on a very small area, with a very high energy density as a result. The small point of light causes a strong heating of the material in a very short period of time. This means that you can bring a metal to its melting point, even to its evaporation in no time. This is also how laser cutters work: they start by vaporizing the material and this way they can cut through a few centimeters of steel like it’s butter.

Laser cleaning is a lot more challenging than that to realize, that is because we want to remove a layer that’s located on top of another material which we don’t want to damage or influence. How do we manage to do this? 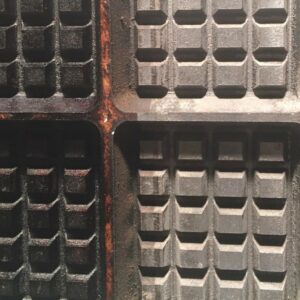 The pollution layer has a different evaporation temperature than the underlying layer almost every time. If we choose our settings wise, we can let the top layer evaporate without damaging the underlying layer. This forms the absolute basic principle of laser cleaning. But we go one step further than this.

With laser cleaning, we make the laser beam pulsate instead of using a continuous beam like we do with laser cutting. This pulsing concentrates the power even more and gives an even quicker heating of the contaminated layer, so as a result, we are able to clean big surfaces in a short period of time.
A third effect is that the laser beam can go through the contaminated layer, but gets reflected on the underlying layer. As a result of this reflection, the underlying layer doesn’t heat up as much, and at the same time the pollution is also illuminated from below, resulting in a double heating!

The fun thing about this way of cleaning is that we can make the difference between pollution and the underlying layer up to a molecular level. You get an almost perfect cleaning this way. And then there’s also a fourth effect. The connection between the contaminated layer and the underlying layer gets broken due to the rapid heating. Most particles will evaporate, as mentioned above, but all the bigger flakes and chunks will easily separate from the underlying layer and can be vacuumed very easily. This is the reason why laser cleaning isn’t only useful for thin layers of contamination or oxidation, but also for thicker layers!

By experimenting with the power, but also with the length of the pulses, the path of the beam and some other parameters, we are able to find an optimal setting for the removal of almost any kind of rust, oxidation, paint, coating, etc. on most metals, stone and even on wood surfaces. To believe it, you will have to see it. Let us know if you’d like to get a free demo in your company!